The Moldovan Inbound Tourism Association explored opportunities and pathways for expanding and growing the Moldovan European Cultural Routes with representatives of the Council of Europe, Iter Vitis Federation, Romanian Ministry of Tourism and Moldovan businesses 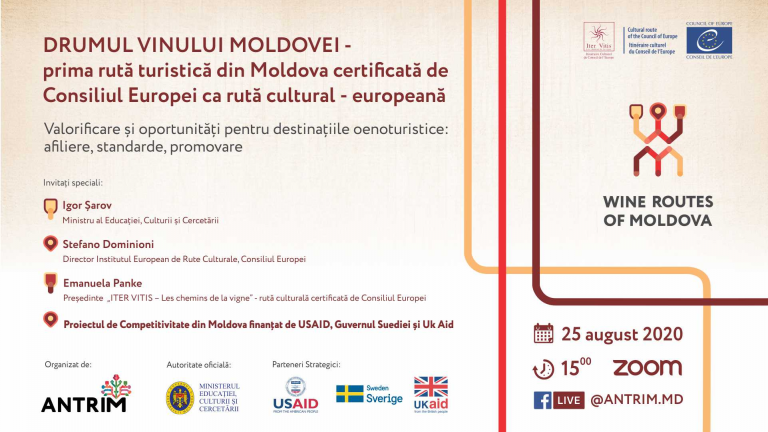 On August 25, over Moldovan 30 tourism businesses, adherents to the Wine Routes of Moldova, participated to a webinar on the “Wine Routes of Moldova: Opportunities for growth and sustainable development under Council of Europe standards” . The Moldovan Minister of Education, Culture and Research, Mr. Igor ȘAROV praised the success of Moldovan wine and tourism industries for becoming the 1st touristic-cultural route to be certified by the Council of Europe. The Minister acknowledged the millennial wine heritage, rich ethnographic traditions around the winemaking and expressed entire support on behalf of the Moldovan central authority in culture and heritage protection to further develop, promote and expand the number of Moldovan routes to be certified by the Council of Europe.

Stefano DOMINIONI, the Executive Secretary, Council of Europe Enlarged Partial Agreement on Cultural Routes, Directorate General of Democracy, Director, European Institute of Cultural Routes, has congratulated the Moldovan Inbound Tourism Association (ANTRIM) for becoming the originator of the Wine Routes of Moldova and the successful representation of Moldova in developing authentic wine experiences and wine tourism itineraries. Mr. DOMINIONI introduced the audience to the benefits of being part of the European Cultural Routes and the Council of Europe’s certification, which is a guarantee of excellence and a network for spreading innovative activities, cultural and artistic practices, as well as quality standards for sustainable cultural development.

The President of Iter Vitis Federation, Mrs Emanuela PANKE, presented the best practices and success stories of the `Iter Vitis -Les Chemins de la Vigne` European Cultural Route, to which Moldova has adhered, with a comprehensive program of tourism routes, cultural heritage and dynamic activities. `Moldova’s Wine Routes are a true example of excellence and cohesion among the public and private stakeholders offering genuine experiences and cultural discovery. Moldova can benefit of integrating also regional routes, such as Danube

Mrs Diana LAZAR, representing the Moldovan Inbound Tourism Association and the Moldova Competitiveness Project, financed by USAID, Government of Sweden and Ukaid, explained that the Wine Routes of Moldova were developed, following a complex development program, implemented over the last 5 years. `The itinerary is crossing three areas granted protected geographical indication. The central Codru PGI Wine Route represents the largest number of wineries, and here you can find outstanding whites, reds, and sparkling wine. The Trajan’s Wall PGI Wine Route extends from the capital, Chisinau, to the South-West. Known for its red varieties, it passes through Moldova’s autonomous Gagauzia territory with Turkish influence and diverse gastronomy. The Stefan the Great PGI Wine Route, which starts in Chisinau and continues to the South-East takes you on a journey through incredible wines, historic monuments and breathtaking landscapes`, related Mrs Lazar, deputy director of the Moldovan Competitiveness Project, ANTRIM’s strategic director.

Known for its rich history, a long-lasting tradition for hospitality that manifests itself through wine and food, Moldova is keen to develop and promote its new Wine Routes, within the European Cultural Routes, as the perfect gateway to exploring this off the beaten path destination. `The Wine Routes of Moldova have opened up 7 unique wine and gastronomy itineraries in the three Moldovan wine regions with Protected Geographical Indication, memorable visits to 30 wineries, cellar doors and tasting rooms, access to 20 wine events, and dozens of immersive cultural experiences. Over 60% of the foreign tourists visiting Moldova in the last years have visited at least one winery and about 43% of them were motivated to travel to Moldova because of its rich and historic wine culture heritage, according to a tourists’ exit-survey executed by ANTRIM in 2018`, informed the ANTRIM’s executive director, Mrs Victoria BUCATARU.